The time we met Mark Knopfler in Hyde Park

My husband was playing Mark Knopfler songs  on the guitar today and I suddenly remembered the time we ran into him in London. It was one of those experiences where you think back asking, did that really happen? We traveled to the U.K. in 2009 for a grand tour that started in London went all the way up to Isle of Skye through Cambridge, York, Whitby, Newcastle, and Edinburgh, and ended in the Cotswolds paradise of Woodstock (which we are always reminded of when watching Downton Abbey).

So, yes, we met Mark Knopfler. The one we had seen in concert several times in the states because my husband has been a huge fan of his since always, from Dire Straits to his new(ish) solo work.

It all started with a bike ride. On the suggestion of Rick Steves (who is usually full of good economical suggestions), we rented bikes for that unusually bright and sunny day in London and spent the morning pedaling like crazy on the “wrong” side of the road with double-decker buses and those oh-so-proper looking taxis whizzing past us…

…We had a lot to see on our last day in London, and our feet had given up on us. We rode the bikes across the Waterloo Bridge and headed to Buckingham palace where we were just in time for the changing of the guards. We then rode on to Hyde Park for a bike ride through London’s “Central Park.”

Parched, we pulled off the bike path to buy some juice when Bogdan matter of factly points to a man walking nearby and tells me, “that’s Mark Knopfler.” Skeptical, I say, “well then go meet him.” Bogdan hesitates, looks around, shifts from side to side. I repeat, “catch up with him and meet him.” So he gets on his bike, rides past “Mark”—I still being skeptical because Bogdan’s main ‘goal’ in London was to meet either Mark Knopfler or David Gilmour (Pink Floyd), highly unlikely!—and Bogdan sat on a bench waiting for him to approach the spot. 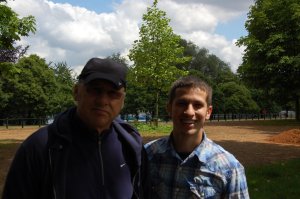 At this point, I’m riding up to meet Bogdan when I hear him ask, “Mark Knopfler?” Mark replies, “yes?” It really was him! Bogdan asks to take a picture with him all the while babbling uncontrollably about Ukraine, LPs, and listening to his music as a child. Mark’s friend snaps the photo, asks if it looks alright, and Mark tells us, “enjoy your time in London.”

Dumbstruck, we both stand there watching Mark Knopfler walk down the path, wearing sweat pants, and enjoying a mid-Sunday-morning stroll through Hyde Park.

I'm a professional news writer in Frederick, Maryland. I blog at S.Y. Ciphers.
View all posts by Stephanie Y. »
« Previous post
Next post »

I am a digital editor currently in Silicon Valley (but pining for Frederick, Maryland). The S.Y. Ciphers blog came about as a result of my attention to details. You will read posts about the little discoveries I make covering a wide variety of topics, including journalism, traveling, health care, photography, Frederick, and more. Read more.

Learn about my career as a digital editor at StephanieYamkovenko.com.

All text and pictures are my own (unless otherwise noted). Please do not use without my permission.