We were working on a web-based journalism project in grad school when my professor said the topic for the semester would be exonerations.

It seemed quite a narrow topic to me back then, but as we started divvying up the work and the assignments for stories I quickly realized the scope of covering miscarriages of justice was much larger than just a semester.

That semester I remember getting angry and sad about the injustice that was being doled out by our criminal justice system.

I revisited those feelings this past month reading Just Mercy by Bryan Stevenson. It was the first book in Kerry’s new Social Justice Book Club. In fact, I basically spent the whole first several chapters in a quiet rage as Stevenson outlined story after story of injustice. 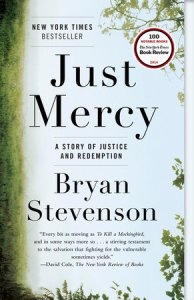 I could go over the atrocities in this post, but I’ll just recommend that you read the book and experience for yourself some of the shocking examples of how our justice system can (and does) fail our fellow Americans.

However, Stevenson takes it a step farther by saying that unless we recognize our own faults and brokenness (recognize our own need for mercy) we won’t be able to desire mercy for others. He uses the example of Jesus saying “he who is without sin cast the first stone.”

When you experience mercy yourself, you start to learn, hear, and see what others cannot. Your start to recognize the humanity in all of us.

Stevenson’s book is full of examples and stories of people he has helped during his career as a lawyer working mainly with inmates on death row. He puts a human face on concepts such as children getting life sentences without parole, prisons becoming ersatz institutions for people with severe mental illness, and the wrongfully convicted on death row. He makes it easy for you to see their humanity and to desire mercy.

The book is a tough read, but it inspired me.

At the very least, I’ll be throwing fewer stones.

I'm a professional news writer in Frederick, Maryland. I blog at S.Y. Ciphers.
View all posts by Stephanie Y. »
« Previous post
Next post »

I am a digital editor currently in Silicon Valley (but pining for Frederick, Maryland). The S.Y. Ciphers blog came about as a result of my attention to details. You will read posts about the little discoveries I make covering a wide variety of topics, including journalism, traveling, health care, photography, Frederick, and more. Read more.

Learn about my career as a digital editor at StephanieYamkovenko.com.

All text and pictures are my own (unless otherwise noted). Please do not use without my permission.